What happens when an employee on a fixed-term contract to cover an employee on maternity leave asks for a meeting – only to tell you that they are pregnant too? No one said dealing with HR issues would be easy…

Thankfully, FPM’s HR expert Lisa Wainwright is here to help. The latest in our series of handy case studies explains what actions to take in just such a situation. 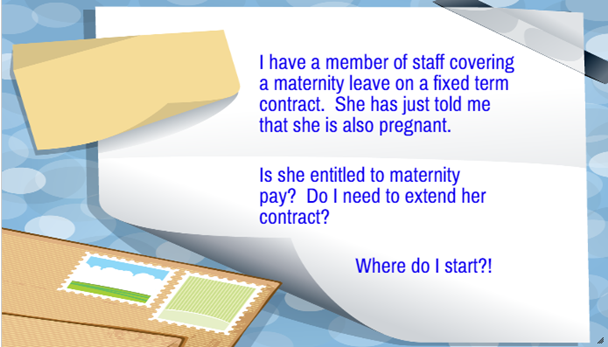 The legal position is as follows:

Rema is employed on a fixed-term contract that starts on 6 February 2017 and ends on 1 December 2017. Her expected week of childbirth (EWC) is 4 December to 8 December 2017. The qualifying week therefore begins on 21 August, 15 weeks before the EWC.

As she has more than 26 weeks' continuous service by 21 August, she will be entitled to Statutory Maternity Pay (SMP), even though her contract will end before her baby is due.

Are you dealing with a tricky HR issue? First Practice Management members can contact Lisa for support with their queries via our email helpline at hrhelp@firstpracticemanagement.co.uk

Salary: £50K to £55K p/a depending upon experience

Salary: £55k to £60k depending on experience

Salary: £50K to £55K p/a depending upon experience

Salary: £55k to £60k depending on experience