May the 4th (and Mindfulness) Be With You!

Second only to Ed Balls Day, May the 4th is now an annual fixture in the social media calendar, with an almost inexhaustible list of ‘May the 4th be with you” puns thrown in for some light comedy values and a jovial weblink.

While it might sound like an abstract idea, you've probably been immersed in a moment many times in your life; you can often be highly focused when you're only doing one thing at a time (getting through the recent year-end finances), doing something for the first time (recruiting new staff to your practice), or experiencing strong emotions (anything to do with PCSE).

Mindfulness is the practice of stopping to take in the moment, including being aware of your emotions and everything around you. Remove all the distractions and the clutter of thoughts in your mind — the nagging to-do list and errands you need to run — and just breathe. Be aware of the world around you for a minute. In other words, stretch out with your feelings. It’s also good for your health. Mindfulness improves memory, refines focus, helps people cope with strong emotions, increases creativity, and boosts the immune system.

“I am one with the Force, the Force is with me…”

No, it doesn’t mean you’ll be moving rocks and throwing starships all over the place – strength in yourself is what gives you confidence in your abilities. In our last Practice Manager Salary Survey, we received comments about the levels of stress and overwork being felt by PMs. Negative emotions are quick to creep in, but by becoming more self-aware, diligent and disciplined as soon as negativity approaches, you can change your state. You can only access this when you are focused, practising some mindfulness so you can unwind and refocus on yourself.

There’s a deep esoteric part to being a jedi, but they also have to be in peak physical and mental condition to focus their powers (and do those fancy spins and flips).

Take time to look after your health – stress and physical pain have an awful relationship that can be damaging to your body and your moods. A few moments of meditation and some yoga can restart your day, helping you stay physically and emotionally healthy.

Or if you prefer your relaxation slightly more violent (but controlled), a punching bag or some weights can stop you from turning to the dark side.

This is advice Yoda delivers to Luke Skywalker as the apprentice attempts to use the Force to lift his X-Wing fighter out of the Dagobah swamp. Yoda’s words are there to prompt us to focus on the moment we’re in and not worry about the unknowable next one.

How does one begin their Jedi training and learn mindfulness? There are lots of resources available on and offline.

You could start with short awareness exercises; you could go out for a walk and focus on the world around you, or the next time you drink some tea, pay attention to the colour, temperature, smell, and taste. You can also concentrate on what each part of your body feels like in the exact position you're in at this moment.

Throughout all of these exercises, just make sure you embrace the experience fully and if you become distracted by thoughts or feelings, then make a mental note of them and return to the task at hand. Once you become more mindful during these exercises, you'll be able to integrate mindfulness into other parts of your life.

In the movies, it takes years for an apprentice to become a Jedi. While it won't take you that long to learn mindfulness, it's definitely something that requires a long-term commitment. It's also something that can't be applied 100% of the time. Do you see a Jedi use the Force every moment of every day? Much as i'd like to use some mind tricks on certain people regularly, that would be exhausting! Mindfulness works the same way. Use it when you want to increase your awareness or reduce experiential avoidance.

Lastly, one of the pesky problems we have in this galaxy is the mindless culture we live in. Our always-connected technology makes it easy for us to escape the present moment. When you're practicing mindfulness, put away your smartphone and turn off nearby screens.

“You have learned much, my young apprentice”

‘Old Obi-Wan’ was the Jedi Knight in hiding who begins Luke’s training in the ways of the Force, even after his demise when he helps Luke blow up the Death Star in the original film (Episode 4/’A New Hope’ for the nerdish among us). Master Yoda continues Luke’s training in The Empire Strikes Back, and in the new trilogy, Luke is now the elder statesman who trains the new ‘New Hope’ in The Force Awakens. On the flip side, in the new films we have Rey and Finn working with Han Solo and Chewbacca, showing them how to use the new technology and the best way to fly a starship through an asteroid field (or how not to fly into a space slug’s belly)

Age is irrelevant – experience and knowledge are what counts. As staff get more familiar with practice life and new people join the team, sharing their wisdom and showing them the ropes to explain things like medical terminology, QOF reports and the intricacies of the holiday booking process. As technology moves ahead, the more cyber-friendly newcomers who have grown up with Androids, Snapchat, wi-fi and Virtual Private Networks (VPNs) can show the seasoned professionals how everyone can benefit from new ideas and ways of working.

“You were the Chosen One – you were supposed to bring balance to the Force!”

In The Phantom Menace, little Anakin Skywalker was the one who would raise the Jedi to a whole new level of success. The Jedi welcomed him, trained him and expected only the best from him, but instead of fulfilling a prophecy of defeating the dark side, he brought it crashing down and destroyed his own Jedi ranks one by one; his own misguided agenda and belief in the wrong person’s vision (and being pals with a manipulating Sith Lord) all but destroyed thousands of years of hard work.

Choosing the right team is important for success – your team can be disproportionately affected by just one bad employee. Finding the right person with the right skills is tough, but the right temperament and resilience for the role are just as essential. A good recruitment and interview process will help you to find the right person that your team needs, and minimise the chances of recruiting someone who will upset the team – creating a disturbance in the Force.

Once your team is complete, setting goals and objectives for your staff (both old and new) means the direction is clear for everyone, and the goal is shared. There is no single person that can sabotage your efforts to create a solid practice team. Having faith in their abilities, monitoring their performance and communicating their successes will prevent them straying too close to the Dark Side.

(If they don’t work out, just remember that you’re not allowed to lightsabre their legs off…) 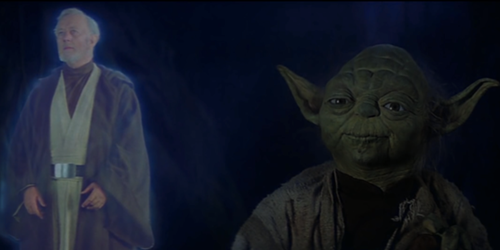 “That boy was our last hope.”

Luke was led to believe that he was the last of the Jedi, the only one left that could defeat Darth Vader and the Emperor to save the galaxy. He finds Yoda hiding on a swamp planet and learns the ways of the Force, but runs off to rescue his friends held captive on Cloud City. As he flies off, Ben Kenobi tells Yoda he was their last hope to beat the Dark Side, to which Yoda tells him “there is another”.

So what happens? Does Luke rescue his friends and they all live happily ever after? No, instead he gets his hand chopped off, Han Solo is frozen in a block of carbonite and C-3PO gets his head screwed on backwards.

There should have been a backup plan in place, someone or something to fall back on if things went wrong. For a Practice Manager, business continuity is now a key priority for success, whether it is a risk assessment, delegation or succession planning. If the Practice Manager is relied on for everything, what happens if they weren’t there? Having a deputy or another point of contact (shall we call them your ‘apprentice’?) means that things can run smoothly while you’re out of the office or dealing with another project.

Sometimes it’s OK to have a purple lightsabre

It’s passed into movie folklore now, but when Samuel L Jackson was cast in the prequels, he was asked which of the available lightsabres he wanted for his Jedi Master Mace Windu – blue or green. Now, Sam Jackson being Sam Jackson, he said he’d only take the part if he got to wield a purple one. His character was an equal to Master Yoda, so a powerful Jedi needs a stand-out weapon, and Jackson said that he wanted something unique so that he could pick himself out in a fight scene.

Think how this relates to your patient’s expectations about what your service can deliver, and how your service comes across – is it a unique offering, is it something that they approve of and rate as a good service? What is it that makes you and your practice stand out for them?

First Practice Management is not affiliated with either the Jedi or Sith, and frankly we’re not sure how this article slipped under the radar.

If you’d like to find out more about how to get the best award-winning training and support for all your practice needs, call us on 0333 240 4010, or contact us

Jubilee Bank Holiday - Are Your Practice Staff Entitled to the Time Off?
18 May 2022

Sustainability: Ways to become a greener GP practice
18 May 2022

Salary: in the range of £50-60K per annum depending upon experience

Salary: c. £60,000 per annum depending upon experience

Salary: in the range of £50-60K per annum depending upon experience

Salary: c. £60,000 per annum depending upon experience

Salary: Excellent remuneration package on offer in accordance with experience