The headlines in the last few weeks in particular have been pointed in their aim at the humble doctor’s surgery. Usually it’s along the lines of “you should be seeing patients by now”, “I can get my nails and hair done, so why can’t I see a doctor?” and the usual comments about “I don’t want to talk to a receptionist, it’s none of their business”.

I saw on one of our town’s local Facebook pages that someone had asked whether one of the practices was “seeing patients yet?”. That was the starting pistol that got the trolls out of the blocks, with the comments racking up in minutes—complaints about the rottweiler receptionists and the lazy GPs, off playing golf, not doing anything all day etc. A few were trying to explain how busy they are and how they haven’t been closed (and yes, it was mainly practice staff and a few supportive patients).

When this all began in 2020 we were still clapping for our valiant health workers, yet now after 18 months the narrative—and patients—have turned against primary care. Only this weekend, practice staff were assaulted in Manchester, with some being treated in hospital for a fractured skull and knife wounds. This was the third attack in Manchester in the same week; another incident that adds to an increasing list of physical attacks against practice staff.

The Pulse estimated that out of all the news stories, features, opinion/editorial pieces about GPs published in 2020, 45% were negatively aimed at GP practices, and a fifth of those were blaming GPs for ‘refusing’ to see patients, and even being blamed for excess cancer deaths.

Recently, the mainstream media has also turned on GPs and practices, still running the myth of GPs not seeing people: 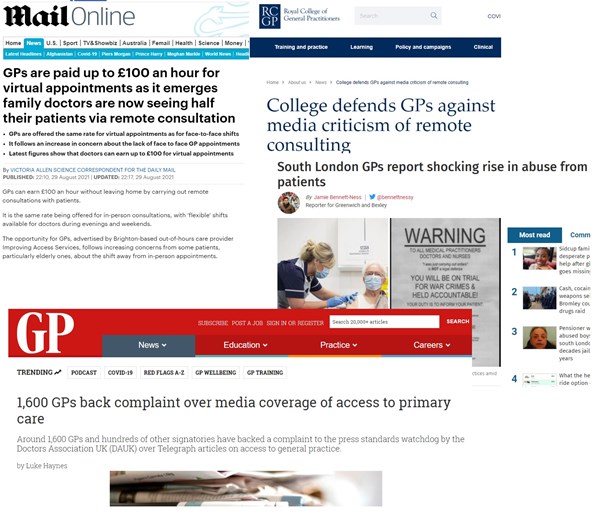 The BMA, among others, is calling for the government to back them up against all the press negativity, at the same time that the Health Secretary was making headlines by ‘reminding’ GPs that they should be offering face-to-face appointments for all patients.

The media loves a good crisis—it wasn’t enough that we had Covid, lockdowns and empty shelves, but they need to enhance it just a bit more to get a few more clicks, with half a story and opinions dressed up as definitive ‘facts’. Former RCGP chair Professor Dame Clare Gerada says that it shouldn’t be left to practices to respond to these and there should be a ‘rapid response unit’ from NHSE to deal with the false stories and to actively counter misinformation. Whether this becomes a reality or not, we’ll have to wait and see, but the GP groups are collectively taking a stand and publicly calling for more support from the government and NHS England to take positive action.

Where in the past people would take the high ground and give it little regard, there’s now the risk of personal danger. Staff shouldn’t be scared to go into work for fear of getting beaten up, or in tears from the verbal abuse that people seem to think is acceptable behaviour these days. Having some raging tweeter spouting rubbish on social media is one thing, but somebody has to draw the line when we’re now hearing about graffiti, bomb threats, and patients attacking staff.

Practice managers are the ones in the background dealing with running a service in the face of staff shortages, vaccine pressures, Covid restrictions, and they will now have to add heightened safety and security to the list. The anger being directed at GPs and practice staff is disgraceful and is fuelled by misinformation and poor messaging from the higher-ups about exactly what primary care is doing. NHS England’s Nikki Kanani said that they ‘can and will do more to inform the public about GP practices being open and available; we need to get the balance right between the innovation we’ve rightly offered out of necessity and the ability to retain the public’s confidence’.

The Pulse published some suggestions for how practices can try and counter the negativity;

As a final note, a GP said the following about the current situation in primary care;

“General practice has been pushed to its limits and is working harder than ever, as has the whole NHS. The only thing we ask for is accurate reporting. It is a patient safety issue”.

Time to be Mindful: How to Manage Your Time and Boost Your Wellbeing Using Mindfulness
12 October 2021