The results of the 2020 Practice Staff Salary Survey are in and on the whole, it is good news, with most roles being paid either in line with or above the market average.

There does seem to be a theme that runs throughout the Survey this year however, which is that non-clinical staff are not remunerated to the same extent as clinical staff, even if their qualification level is the same.

Which Career Path Offers the Most Opportunity?

Of course, both careers are vastly different and include diverse skill sets, however both career options would be available to somebody looking to start a career in Primary Care and practices offer entry level positions for both roles.

(*Average of Junior and Senior Receptionist roles according to survey results)

Is Management an Undervalued skill?

This survey does not take into account the complexity of such roles and sizes of the practice or demands of the job, but we can see vast differences in the salaries of these roles compared to the market average: 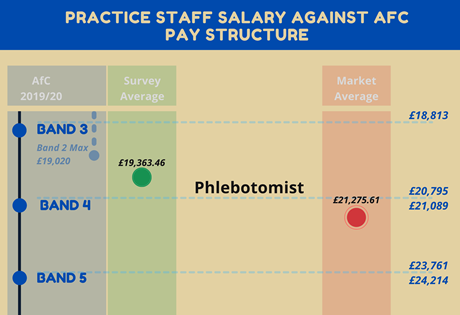 Is there a Balance Returning?

The salary for Salaried GPs is the only salary to have fallen dramatically in 2020 vs 2019. The average Salaried GP is being paid £4.14 less per hour, than they were in 2019.  This could help to explain why the average Salaried GP in our survey was receiving £19,000 more per year than the market average, suggesting that a balance may be returning with practices either choosing or not being able to pay as much as they could for a Salaried GP in 2019.

How Does Primary Care compare to other Public Services?

Based on our survey, the overall increase in pay for Practices for 2019/20 was 2.4%. Inflation this year is sitting at 1.2%, meaning that the Primary Care increase is almost twice that of inflation.

According to a report, the average salary for a Public Sector full time worker is £31,844. That’s £2k more than the private sector. But how does Primary care compare to other public services?

Secondary Care Doctors: Have received a 2.8% increase to thank them for their efforts with battling Covid-19.

Salary: A very competitive salary – consummate with expertise and experience

Salary: A very competitive salary – consummate with expertise and experience