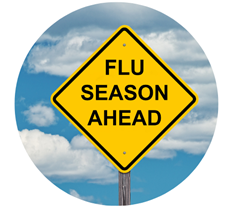 Originally we were looking at starting on the 19th September, but when our supplier advised of delivery 2 weeks earlier than originally planned, we were galvanised into taking speedy action to set up the clinics.

Our first thought was that however we had done it in previous years, it would probably not work this year due to COVID and social distancing. Normally we would look at doing Pneumovax, Shingles, and BP at the same time; this time around, that would slow the process.

We had heard about sending out Barcoded letters and investigated how this could work - it looked as though it was quite easy to implement and an excellent solution.

If you use a Mailing company for your letters, they could organise them from the list and barcodes you assign each patient. We decided against Barcode texts, another option, as we needed to think that not everyone has a mobile phone, and a paper barcode backs up the data and speeds up the system. We bought a Barcode Scanner for £30, and tested the system before confirming that this was what we were going to do.

At the same time, we looked at the logistics of how we could get a large number of patients in and out in the shortest time for social distancing, and then could we use a one way system. Patients were told to bring the letter with them, and we spaced the arrivals over 5 hours (dependant on the patient's surname letter.) Once we felt we could achieve this we met with the partners and put suggestions to them. We wanted to invite our 1,700 over-65 patients in one go, something we had never done before and this did come with some concerns and worries. We then sorted out the letters and then started texting the patients to advise them of our plans and after that, we had to sit back and worry and hope for the best.

Delivery of the vaccines had been planned for the 2nd September and once delivery was made at 7:50 am, the first hurdle was over. We sent out text reminders and sat back, hoping patients come. We had several patients responding that they were going to a pharmacy in October rather than coming to the surgery and this made us apprehensive as to how many would actually turn up.

On the day - Setting up Clinics

On Saturday, we arrived at 7:15 to set up - we had a rehearsal the Thursday before so that each staff member knew exactly where to be and aware of the system. We were aiming to get patients in and out as quickly as possible. Once the patient was directed to a clinician the bar code letter was given to the clinicians and put into 2 piles - left arm or right arm. By 8:00 am the queue had started and the doors opened, temperatures taken, and then patients guided to the rooms where the clinicians were - straight in and then directed to the designated exit.

First signs were that is was working well - we had a member of staff printing off the Barcode letters for those who had forgotten them (which were quite a lot) and then we had a procedure to have one person using the scanner to get the details on the clinical system. By 8:30 it had quietened down and we were worried of possible low numbers. At the top of each hour, we were extremely busy with a fair queue and would certainly suggest that half-hour slots instead of full hour slots would work well.

For the next few hours, we got the patients in and out quickly and received many plaudits for the system we had in place.  There was the odd patient that thought the system was crazy and complained quite loudly but we generally ignored them as it was evident that patients felt safe and happy with the procedures we had in place and their safety.

By 1:30 pm we had done 1120 patients which was phenomenal, when under the old method we may have done 500/600. The uptake because of Coronavirus was higher than normal and a lot of patients said that this is the first year they have had it.

As normal we never have any problems in getting staff to work the day, as there is something quite unique about a flu clinic with Danish pastries and other food provided. All staff had gowns, masks, and visors,   and we were visible with hand sanitisers and cleaning surfaces at regular intervals. There had been some stories of Barcodes not working, but in our case 99% worked; if not the details were put in manually. When we left on Saturday all the clinical systems had been updated.

Since we got through the majority of our over-65 patients, we turn our attention to the children’s flu for this Wednesday. After sending out texts to those eligible, incredibly the phone rang off the hook with parents booking appointments, and our first delivery of 250 will be used up with a list for the next batch to arrive.  Normally the uptake is very poor.

The under 65's will be more difficult as our supplier has split it into 3 deliveries instead of two - no announcements have been made as to how we can get the extra vaccines to satisfy the new cohort of 50-65-year-olds that the Government is supposed to have.

After the clinic, we sent out texts thanking patients for coming and asking them to write a review on the NHS website.  We got loads of compliments which is always the cherry on the cake.

I hope that our experience will help in your own planning, and I hope you all have a great flu season.