An Interview with BBC's 'The Real Peak Practice'

The staff and patients at Baslow Health Centre in Derbyshire are set to be the stars in BBC2’s ‘The Real Peak Practice’ at 7pm on Thurs 10th and Friday 11th September. After previously being aired on BBC One Yorkshire, Lincolnshire and East Midlands, the two-part documentary chronicling a year in the life of a rural GP Practice is set to hit screens nationally. 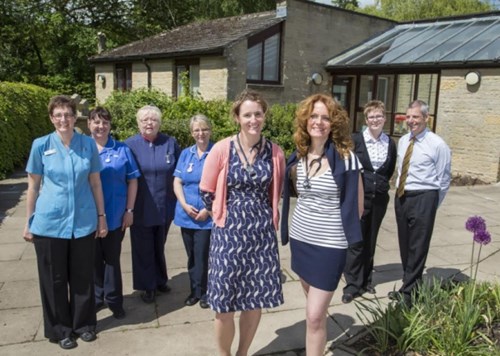 In the run up to the show’s airing tomorrow, we spoke to Practice Manager, Karl Rex, who manages the Health Centre in the Dales. Here’s what he had to say...

The staff at your practice are starring in the two part BBC programme ‘The Real Peak Practice’, how did it come about and what was their reaction to news of the documentary?

Initial contact was between our Senior Partner Dr Louise Jordan and her friend Sally Bowman from the BBC (Sally used to live in the Dales.)

The idea was discussed between Louise and Sally, probably over a glass of wine, before it was then raised and discussed at the practice business meeting. All agreed that it would be a good idea and an opportunity to highlight some concerns on national TV, so the idea was then raised at a practice meeting. It was met with some raised eyebrows, but on the whole it was felt that it would be fun and a good opportunity.

The intrusion during the year of filming, although not constant was a bit draining and you never knew who was going to have the mic shoved down there top next and a camera shoved in your face. Despite the (sometimes unwelcome) intrusion, most of us quickly relaxed and got on with the day and even gave interviews.

Sometimes they caught us out by surprise though and that either was funny or alarming!

Did you learn anything from the process and getting to watch back on the practice in hindsight? Was there anything you saw that you thought you’d do differently?

Did we learn anything? We quickly learnt to look at people’s chest for the mics or the TV camera appearing around the corner before we spoke.

On a serious note, it was enlightening to see what the GPs did on home visits, especially when dealing with the terminally ill.

When watching it back, some of us cinched and thought of a better way to say what we had said, or thought could have mentioned something else.

The filming took place over a year and they would home in of different story lines, sometimes theses related to what was currently the topic of conversation within the media.  I personally gave several interviews on various topics, but only snippets got to make it on the big screen.

I also learnt not to have my hair cut. Some of the interviews would be off the cuff, whereby the film crew would ask you a question and away you would roll.  Weeks later, the producers would decide that they would like to do the interview again. You immediately think, “What did I say last time”. You get told that you did well (relief), only to discover that you have to do it all again at a later date, as your hair was too short and did not match the first filming.

Staff uniforms also got changed during the year too; the film crew were not too happy with that.

What has been the reaction from patients to the TV Documentary?

The patient reaction to the filming has been outstanding. We advertised that BBC was filming the documentary before, and I’m certain that more makeup was being applied during the filming in the waiting room. After the programme being aired on BBC One West Midlands, Yorkshire and Lincolnshire, our fairly static patient numbers have increased by 80, which is a lot for a small rural practice.  Some of the new patients have indicated that they are joining us because they have seen us on the TV and that we came over as a caring practice.

We have received over 20 letters of congratulations on a good and informative programme.  We have also received congratulatory emails, telephone calls and praise from patients in person when attending the surgery.

Lots of patients said that they gained a better understanding of what the doctors and the surgery does.  Some have indicated that they would like a follow up programme.

I imagine it felt strange having a television crew around the workplace for a year... Does it feel strange not having one now?

It does not feel strange now that the film crew have left us as their presence was intermittent. They could be with you for a week or just a couple of hours, then not seen again for weeks.  However, you do find yourself thinking, ‘oh, this would be good to tell the crew for an interview’, only to realise that they are not coming back... or are they?

We could see on the show that you have an elderly population in the area, as well as being a rural practice, what challenges does this bring?

Nearly 32% of our population is over the age of 65 years old. Our elderly population not only brings the demands of medical attention that the elderly require, we also have the rurality of our patients to consider.

Like many rural practices, our patients are spread far and wide. It may only be a mile as the crow flies, but it’s about five by twisting narrow roads, and because of the elderly population, many no longer drive and therefore reliant upon obtaining lifts from family and friends.  This causes problems when booking appointments, as we have to accommodate this, and public transport is a skeleton service at the best of times and does not pass every door.

Take a look at Baslow area on the map, its very hilly and therefore our elderly have a job negotiating the hills on foot. This increases our home visit requests. We are also a dispensing practice and offer a home delivery service for medications to those who are unable to attend the practice.

If you were given the chance again, would you take part in another documentary? Is there more to come in the future?

Yes we would welcome a follow up documentary! Unfortunately there has not been any mention of a follow up yet, but this may change after it is aired nationally if the ratings are good!  Who knows?

The Real Peak Practice will be aired on BBC2 at 7pm tomorrow (September 10th) and Friday (September 11th).

© First Practice Management, 2015. Unauthorised use and/or duplication of this material without express and written permission from this blog’s author and/or owner is strictly prohibited.

Line expires max; in Nginx congtfuraiion takes care of browser caching at nginx-level ver well. It sets cache duration for 25-years. I am using w3 total cache from long time. In fact, I about Nginx+W3 total cache 2 years ago. There is nothing wrong in Browse Cache option provided by your plugin. It's just that nginx can handle it faster and itself. IMHO its always better to save PHP from some work. For this reason, I also recommend disabling gzip/compression related options.By the way, I already scheduled a W3 Total Cache + Multisite article around weekend. That will also have few special congtfuraiion options.

Salary: £40-£45k depending on experience

Salary: According to experience – circa £48k

Salary: Dependent on skills and experience

Salary: Up to 45k pa (pro rata- depending of experience)

Salary: £40-£45k depending on experience

Salary: Up to 45k pa (pro rata- depending of experience)